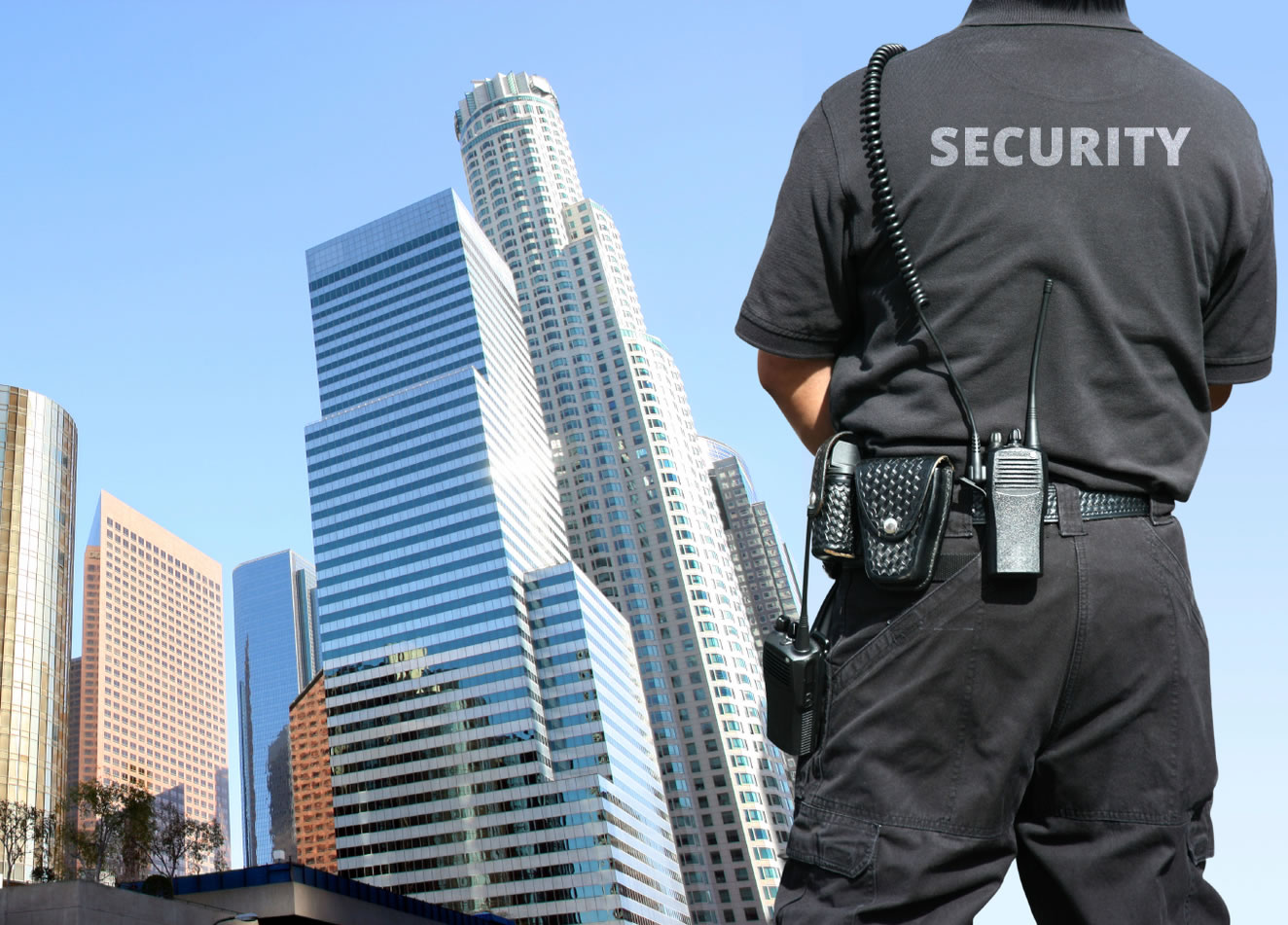 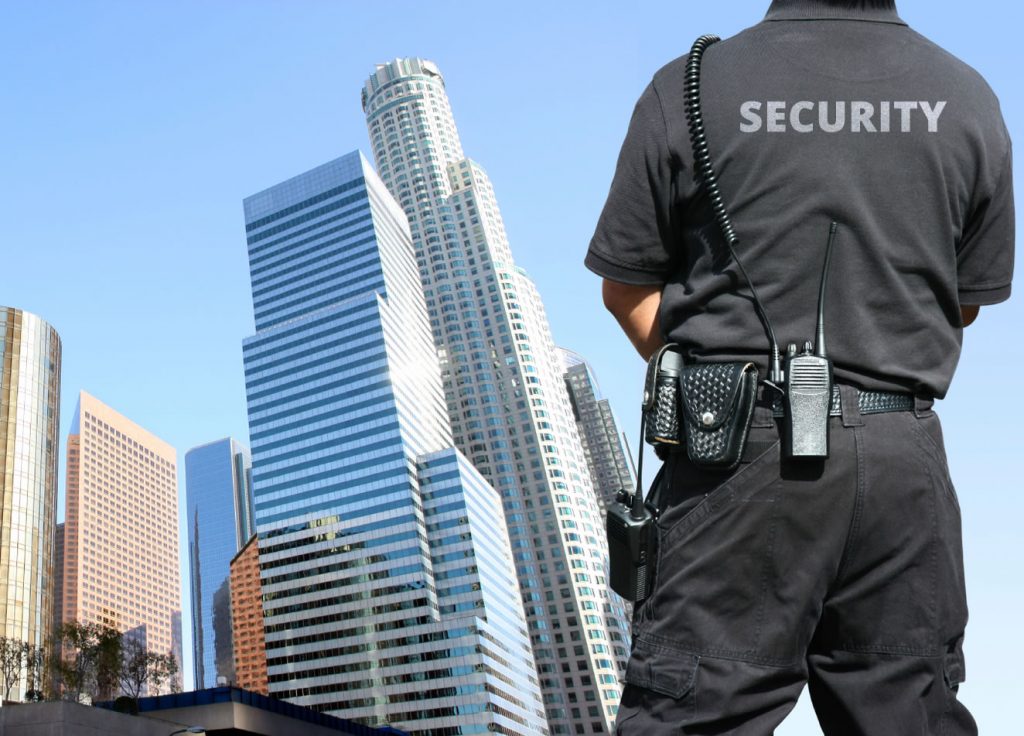 Your Future as a New York Security Guard

Security guards play a vital role in safeguarding people and businesses in New York City and across the world.

New York City is the hub of different types of events and it is not surprising that The U.S. Department of Labor’s Bureau of Labor Statistics reports that the state of New York has the second highest employment level of security guards in the nation just behind California with 112,750 as of 2016 (estimates don’t include self-employed personnel) and a higher level of salary which we will cover later.

Safety and the growing concern of terrorism threats are the main focus for businesses, and as a result, demand is increasing as job prospects look good for those of you aiming to become security guards.

According to the BLS (Bureau of Labor Statistics), the number of security guard jobs will increase faster than average over the next few years but in order to gain employment for one of these jobs, you’re going to have to get training and experience.

Most companies hire security officers to be be on duty around the clock, making this a great and flexible job prospect with options of shifts and part-time opportunities.

The Role of A Security Guard

Security guards are instrumental in providing “first defense” against intrusion, they guard, patrol, or monitor premises to look out for vulnerabilities or threats and prevent theft, violence, or infractions.

There is an important distinction which is often misunderstood. The role of a security guard is not the offensive, they play a more of preventive and defensive role; their role is to deter problems from occurring in the first place, meaning that security personnel prevent breaches and do not pursue or apprehend offenders beyond the perimeter of their assigned property. They do not make arrests, instead the security guard will call the police when a threat is in progress or file a report when a crime has already occurred.

Security guard jobs still have some downside as it can be dangerous work with the threat of theft or worse depending on the job type, that is why many security guards receive training for firearms, self-defence and emergency response training. In some cases guards are instructed to let petty thieves go to avoid escalating confrontations.

The type and level of security may differ from one security guard’s job to another. While the detailed list of roles and responsibilities have been broken down into many topics, they can be simply broken down into the following categories:

How much do you make as a security guard in New York?

New York Security Guard salaries vary greatly from town to town as well as training you have. Apart from a salary, you’ll find many security companies offer decent benefits packages that are inclusive of medical, dental, paid for vacations, 401k retirement plans and in some cases even profit sharing or support for college career.

According to the U.S. Bureau of Labor Statistics,  the average wage in New York can be around $31,950 annually. We can also look at data from other sources like salary.com which has broken down the salary by different towns. (see below) 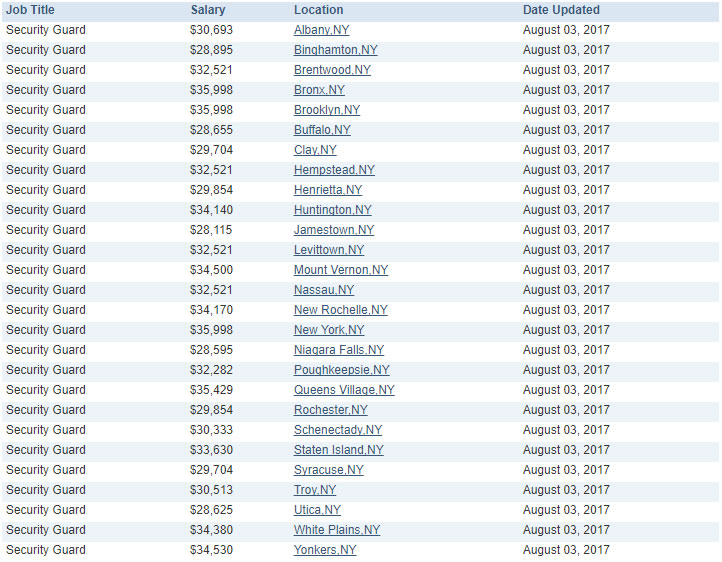 Unlike many other career options, companies often hire security guards with little to no prior experience in the field and then train offer them on the job training and certifications. This makes the prospect of becoming a security guard more appealing to those who aim to excel on the job and in related careers and earn decent living at the same time.

Basic experience as a security guard can also open many doors to new and exciting career options:

With growing demand, and constant changes in technology, the best way to advance and become more valuable to employers is to receive additional training. Even people with experience need training in order to be attractive to employers.

Security guards with more certification and training usually get paid more and promoted faster and with more training it is easier to enter management or to start your own security company.

The best advice my mentor shared with me is “It’s not how you start, it’s how you finish”. Always have a plan, keep focused and aim to be the best in everything you do.

About the Author: james

What Security Guards need to do to stay safe from Corona Virus – COVID-19. (New York or anywhere)

What Security Guards need to do to stay safe from Corona Virus – COVID-19.

What is the hourly rate for a security guard?

What is the hourly rate for a security guard? According to payscale, the average hourly

How Do Security Guards Handle Their “Fight or Flight Response” Instinct

What employers look for: 17 Characteristics Of A Good Security Guard Let’s start with the 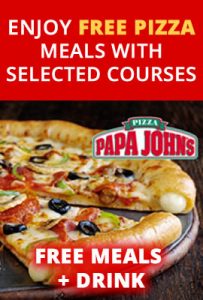 What Security Guards need to do to stay safe from Corona Virus – COVID-19. (New York or anywhere)

What Security Guards need to do to stay safe from Corona Virus – COVID-19.

What is the hourly rate for a security guard?

What is the hourly rate for a security guard? According to payscale, the average hourly